Hab Shifa black seed oil capsules contain the same 100 percent pure Black Seed Oil as our bottles, but in a convenient capsule form.
Antioxidant-rich and high in essential fatty acids, regular use helps to maintain a healthy immune system, giving it the ability to fight infections. Provides numerous benefits for the body, hair, and immune system. For centuries, this unassuming little aromatic seed has been revered as a remedy for reestablishing the body’s natural balance, strengthening its defences, and treating a variety of chronic diseases.

There has been a growing body of research demonstrating the healing properties of Hab Shifa Black Seed Oil Capsules, something that has been assumed for centuries but can now be scientifically demonstrated. Black Seed is now recognised to have a variety of beneficial properties, owing primarily to its antioxidant, anti-inflammatory, and antibacterial properties.

Hab Shifa black seed oil Capsules is a well-known natural remedy for allergy relief.
Nigellone and TQ, two active constituents in Black Seed Oil, have been shown to support the body’s defence system, control allergic reactions, and provide significant relief from a variety of allergy symptoms.
According to a 2008 study, nigellone has antihistaminic and bronchodilator properties, acting specifically as an antispasmodic and clearing away mucus in allergy sufferers, as well as relieving asthma symptoms.

TQ is anti-inflammatory and detoxifying, as well as anti-asthmatic and anti-allergy. These active components of Black Seed have been shown to reduce inflammation and provide symptomatic relief to allergy sufferers when combined.

Hab Shifa black seed oil capsules has been shown to boost the immune system’s response to infections and fungal diseases, as well as aid in the reduction of symptoms associated with allergic reactions, inflammatory conditions, and autoimmune disorders.

Support for the Skin and Hair

The antioxidant, anti-inflammatory, and immune-supportive properties of Hab Shifa black seed oil capsules have been shown to help reduce hair loss and thinning hair, as well as psoriasis and eczema symptoms. A group of conditions associated with an increased risk of stroke, heart disease, and diabetes. In comparison to a placebo, Black Seed resulted in decreased BMI, body fat, blood pressure, cholesterol, and glucose levels.

According to a 2016 study, Black Seed Oil not only improves the body’s ability to regulate glucose, but also plays a significant role in the treatment of diabetes complications such as cardiovascular problems.

Much of the clinical research on Black Seed has focused on its antioxidant properties, which help the body heal itself by reducing the effects of free radical damage.

Additionally, research indicates that TQ, or Thymoquinone, is one of the most significant chemical compounds found in Hab Shifa Black Seed Oil Capsules.

This compound has been shown in studies to be hepatoprotective, anti-inflammatory, and antioxidant, and to act effectively as an antimicrobial agent, modulating the immune response, supporting the immune system, and assisting in the prevention of infections.

Where it all began

The Black Seed has been used to treat a wide variety of diseases and ailments for thousands of years and is one of the few ancient remedies backed by scientific research.

The history of Black Seed Oil dates all the way back to ancient times, when it was revered by both Eastern and Western civilizations. Black Seed has been mentioned in ancient texts and has been discovered in Pharaohs’ tombs.

For hundreds of years, Hab Shifa Black Seed Oil Capsules has been used to aid in the maintenance of many civilizations’ health and well-being; however, it wasn’t until recently that science discovered why Black Seed Oil is such a panacea for maintaining health and treating a wide variety of illnesses.

The Black Seed is a member of the Buttercup Family and is a perennial herb with white flowers that grows to a height of 16 to 24 inches.

The deep black, sharp-cornered rectangular seeds (no more than 3 mm in length) are the part of the plant used to make our Black Seed products.

Gernot Katzer, a culinary spice expert and former researcher at Austria’s University of Graz, has compiled a comprehensive list of the 63 different names for this remarkable herb and spice. What Katzer notes is that nearly all of these names contain an element meaning ‘black’ in reference to the seeds’ unusually dark colour, as well as a second component meaning ‘cumin’, ‘caraway’, or simply ‘grain’.

Over 100 different constituents are found in the Hab Shifa Black Seed, including vitamins, minerals, and essential fatty acids. Sprinkle the seeds on cereals, muesli, and salads, or incorporate them into breads, soups, stir-fries, and smoothies. 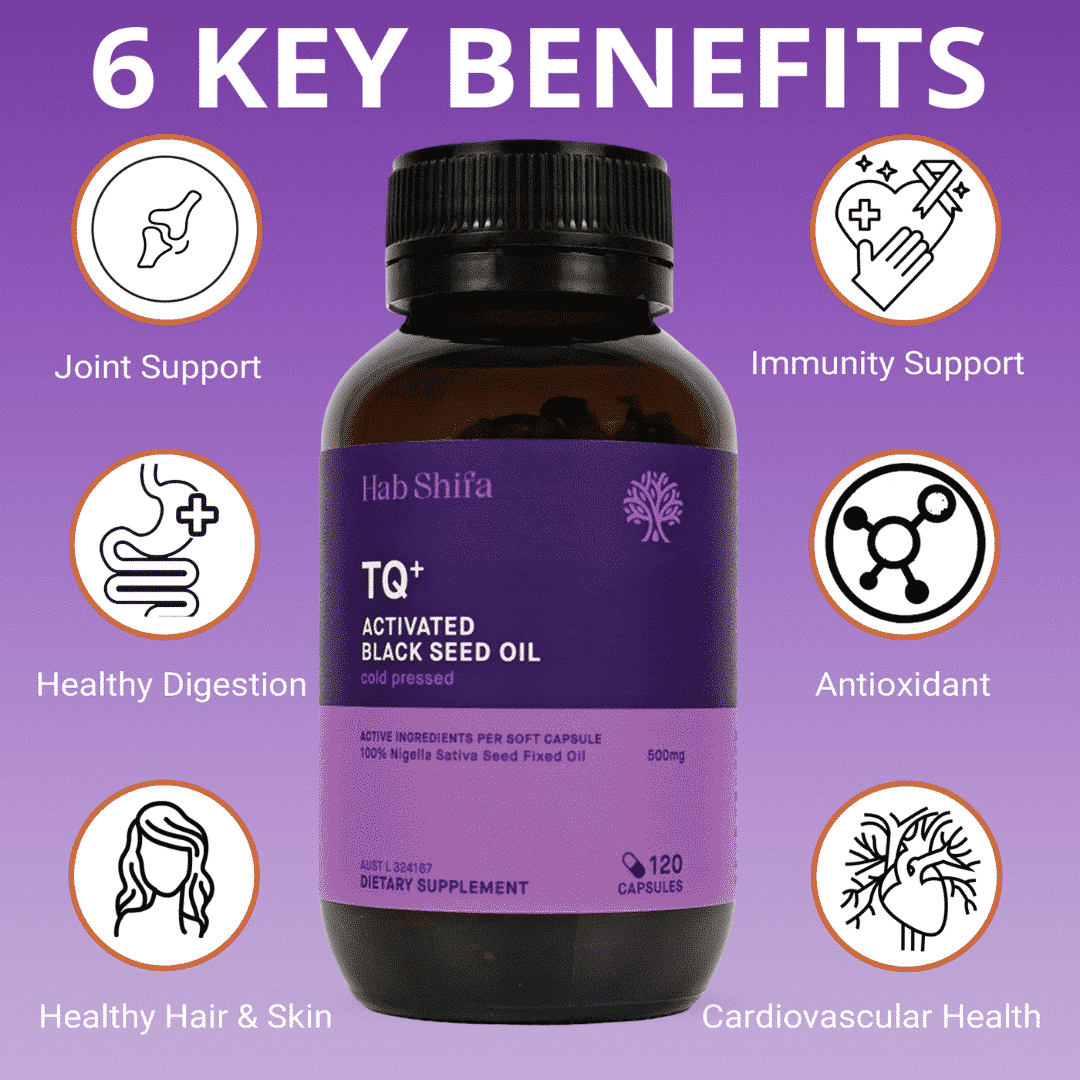